I know we bitch about these things and we’re not the only people that deals with it but what do you actually DO about it?

I’m really trying to stop complaining about the things that piss us off and I’m trying to come up with actual solutions. So I can have every policy, procedure, and checklist in the world in place but the reality is that sometimes shit gets left behind. Then what?

Do you make them go back and get it on their own time? What if the job is two hours away?

Do you actually make them pay to replace things?

Sit them out the next day?

Every state is different in what type of “consequences” you’re legally allowed to implement based on the company structure you have in place. So first get a clear idea on what you’re even allowed to legally do.

In some states, you’re not allowed to deduct from the pay of a worker for any reason…

This is why many movers and companies resort to paying a small amount and the rest is a bonus. Then if the worker messes up…they deduct money from the “bonus” portion of the pay.

But like my friend Paul LaFontaine says, “ I never punish with money. Taking food from a starving person is not a meaningful teaching consequence.”

If the driver forgets the tool bag at the job site the driver goes back and retrieves it. A mover’s time is a meaningful commodity and we can deliver guidance and consequence, without being overly punitive.

In a world where hourly jobs are a commodity and working for $14/hour at a company lifting boxes or $14/hour lifting boxes at the ski sled shop across the street is as easy as walking over and signing up, corporate things like “writeups” and counseling and all that are meaningless tools.

A quiet word, a look, or an extra hour spent retrieving a tool bag have far more impact than a piece of paper.

Our guys have chosen a life where pieces of paper aren’t the driving factor and pretending we have complex and nuanced HR programs with deep performance files is a fiction.

I do, however, write up office people. Their reaction to paper is far more powerful.

One of the biggest disservices you can ever do to someone is to prevent them from experiencing the consequences of their actions.

Especially if you prevent them because of your own fear, or underlying insecurities you may have. It’s actually a selfish thing to do. You’ll be preventing an opportunity for that individual to grow and experience self-betterment.

We don’t grow if we don’t experience consequences for our failures and mistakes.

Punishment isn’t “intolerable” or “hateful” as many of the liberal snowflakes love to claim. In fact, it shows your hate if you don’t enact consequences for mistakes to help them learn.

Speaking from my own experience. The greatest gifts that I have in my life today came out of mistakes I made, and the consequences that resulted from them.

What a shame it would have been if someone took those experiences away from me.

Make sure the punishment fits the crime

We must take care that the consequences we deliver are not projections of our own weird sense of justice and are instead level set with an eye for teaching about action and consequence.

We have to be mindful of that, and in doing so, the state guidelines are a great starting point.

Here is a “consequence” that a fellow mover facilitated just this week.

“Two of his guys were acting like children throwing tantrums. Blocking each other’s calls.

Being on the same crew and calling the office to have the office call the other guy to deliver instructions.

It was over a “respect” dispute on the use of a chair one morning.

Made them express their anger and emotion.

Made them stay there looking at each other until they reconnected.

Literally told one guy to “get back here” when he tried to walk out in a huff.

They shook hands. I imagine the video team is back in motion.”

All our respect issues are solvable and if you act like a child you get treated like one.

What steps should you take?

The system then becomes very clear. You have to take these steps to ensure that 1) your rules get known and followed, 2) that it is clear that mistakes have consequences, and 3) those consequences are there to teach and prevent further bad behavior.

It’s easy to punish…it seems to come naturally. it seems that all we want to do is exact a little revenge every once and a while on the idiots that seem to proliferate and multiply like breeding rabbits.

But some times…the best way to punish to is to prevent stupid shit from happening in the first place.

And that is where the carrot comes in.

Effectively rewarding our mover and crew so that they are incentivized from even thinking about screwing up.

Yes, I know, we’re treating like children by doing this. They’re adults they should be able to work like adults and not have to require rewards and bonuses…

Therefore, having a rewards program or contests where they have to chance to win, based on good behavior, is sometimes not only a way to get more and better people to work for you, but also, to keep them on the straight and narrow.

There are many ways that are workable. The trick is finding what works for you, your company, and your crews. Finding that sweet spot will take a little bit experimenting and tweaking…but it can be done.

While it seems that the right thing to do is be heavy-handed and rule with an iron fist…in reality, this is just not the case.

You have to remember, this is a low educated and low skilled job. The men that are applying to these jobs are not known for personal responsibility as a generality…

And they know that labor type jobs are a dime a dozen.

So, penalizing the crew with money and a heavy-handed approach is foolhardy.

Make them, on their time, get back the items they left behind.

Make them, on their own time, repair the damages that they caused.

The consequences should fit the crime and they should be done in an attempt to teach a lesson so that it does not happen again.

Using money as a penalty should be higher ethics gradient as used as a last resort. 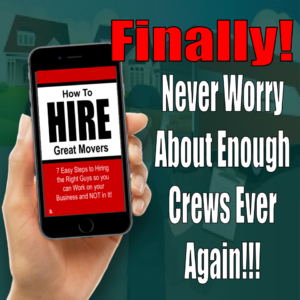